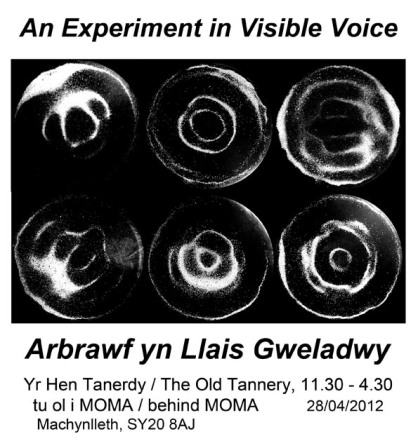 Lou Laurens on :An Experiment in Visible Voice.
GWRANDO at the Tannery, 28th April, 2012.

What does you voice look like? and Experiments in Visible Voice has been an investigation into the sharing and presentation of aural/vocal experience. The project has explored, in very practical ways, Adriana Cavarero’s concept of making oneself audible as making ones’ self audible: uniqueness-in-resonance. Furthermore, her themes of giving voice as convocation, and of giving voice as a reciprocal, and a political action, interpolate the processes of the project.

The audiovisual material we collected in this project working with eidophone in conjunction with digital recording technologies has been raw, diverse, poignant, and wonderful. People used their voices to explore the effects of soundwaves generating patterns in the sand on the vibrating surface of the eidophone. There were fragile hopeful first moments, moments of disappointment, and developing confidence and excitement; as well as an extraordinarily rapid, and perhaps largely unconscious assimilation, of what it takes to physically produce resonant sounds, over the course of a turn on the eidophone. We hear the individual in each voice, and also the individuality of each 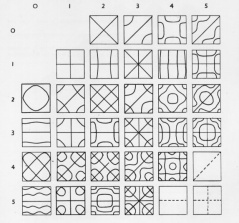 This show is the result of an unfunded two-week residency in the Tannery; simple means and the short timescale have been determining factors in the development of this installation. The work presented is an experiment, a beginning, a sketch.

We have worked with the recordings of the voices as they are, with no effects or looping of recordings. Each sound you hear is the unique recorded vocal action, and is not repeated in the composition. Only six voices are sounding at any one time in the composition, and in future we want to explore with many more than that; however, included over the course of the composition are recordings from all the participants who have taken part so far. Composing with the recordings was an intensive listening process/practice, as we developed a choral audio work which celebrates the beauty of each voice and relates the voices one to another. With the associated video footage, we created a composite of multiple eidophone images.

Working with the recordings, I was reminded of extended voice practitioner Phil Minton’s Feral Choir project. He writes:

My recent experience of working with singers, many of whom think they cannot sing, has strengthened my conviction that the human voice is capable of so much more than is generally understood …anyone who can breathe, is capable of producing sounds that give a positive aesthetic contribution to the human condition.

Minton takes singers and non-singers through a series of workshops to create his feral choir: here, it was singing into the eidophone which encouraged participants to use their voices in inventive and experimental ways. The process makes no distinction between languages, right or wrong ways to use the voice, good voices or so-so voices, singers and/or non-singers.

Non-verbal sounds sounds predominate, with participants to exploring a kind vocalising often reserved for familiar and private interactions. The excitement with which many took part led me to speculate whether we were witnessing an active nostalgia for preverbal multisensory experience: recently, the infant-synaesthesia hypothesis suggests that our first experiences are synaesthesic experiences; but it also reminded me of the feelings of expansion and playfulness I experience through free improvisation, in particular at the monthly ‘gathering’ hosted by Maggie Nicols.

Below, GWRANDO’s aims for the residency and the invitation to attend the first open day:

What differentiates Margaret Watts Hughes from other pioneers of in the field of acoustics, is that her experiments form part of her lifetimes’ attempt to further her knowledge of the singing voice; specifically, in order, to further her teaching ability. Her 1891 article for The Century, discusses how the singer might produce specific patterns by varying pitch, timbre and intensity – in other words, as much as her enthusiasm for the process is revealed in the article, it is the singer’s technique that is the destination of her experiments, rather than a theory of sound. She states that she developed her experiments ‘as a vocalist’, for vocalists.

The eidophone experiments will form part of a creative attempt to develop a clearer understanding of the work of philosopher Adriana Cavarero. Cavarero in For More Than One Voice (2005) unravels some myths of the ‘voice’: in particular, ‘woman sings: man thinks’. Her proposal of a vocal ontology of uniqueness, that the voice is the equivalent of what each person has ‘that is most hidden and most genuine’ is developed into an argument that turns on an idea of ‘uniqueness-in-resonance’: the act of speaking or singing as both making manifest one’s own uniqueness, and as a convocation of other voices. There can be no generalized notion of ‘voice’ and what ‘voice’ means: there is always someone who speaks or sings.

Be that someone! You are invited to continue Margaret Watts Hughes’ eidophone experiments with GWRANDO at the Tannery. On Saturday the 21st the Tannery will be open all day. What does your voice look like?Sing into an eidophone and find out. You only need to sing one note, but you could sing a whole song. You will take away your very own signature voiceprint. The visible sounds will be filmed and the audio will be recorded to form part of a multi-voice film and sound installation.